The annual WISLI Student Conference provides an opportunity for students at WISLI institutes and UW-Madison to present original research on various disciplines across Southeast Asia, South Asia, Central Eurasia, and the Middle East, as well as transnational Asian studies. Abstract submissions are organized into thematic panels of two to four papers, with a moderated Q+A session following the presentations.

The 2022 WISLI Student Conference was held on Saturday, July 9th from 9:30am – 4:00 pm in the Pyle Center at UW-Madison. Parallel sessions were held in Rooms 309, 313, and 335 throughout the day. Coffee/tea and a boxed lunch were provided for conference attendees. For questions, email seassi@lpo.wisc.edu.

Click here for the full conference schedule with paper titles for each panel!

We are pleased to have Dr. Elisabeth Arti Wulandari as this year’s keynote speaker! Dr. Wulandari will present her talk entitled “Art and Politics in Post-1998 Indonesian Theater: Artivism in Teater Garasi’s Jejalan.”

Keynote lecture abstract: A longstanding literary debate pits art-for-art’s-sake against politically-engaged art. In Indonesia, political events reignited this debate in post-1998 Indonesian theater, following the fall of Soeharto’s authoritarian regime. Not only did the year 1998 see revolutionary political reformation, it also ushered in a social and cultural revolution. Before 1998, the New Order Regime was often depicted in Indonesian drama as the common enemy of the people. Post-1998, that shared political target was no longer in power, and the need to criticize the repressive state had arguably diminished. So, how have Indonesian theater practitioners transformed their performative practices since 1998, and to what extent do the forms and themes of pre-1998 theater still speak to a post-1998 society and its attending problems?

As with the rest of Indonesian theater, the post-1998 years were an important turning point for the Yogyakarta-based theater troupe Teater Garasi. Teater Garasi, along with a host of other activist, social and cultural organizations, saw a rapidly changing society and felt the need to respond in a way that would take advantage of the cultural moment, and to ensure that theater remained relevant to the new social and political reality around them. But Teater Garasi didn’t just care about the political and social dimensions of their plays; they also cared about the aesthetics, and about technique. My presentation situates Teater Garasi’s cultural activism in post-1998 Indonesia, examining how their understanding of what theater should look like after 1998 shaped their performative practices. I will specifically discuss Teater Garasi’s 2008 performance Je.Ja.Lan, and examine the ways in which it exemplifies “artivism” in Indonesian theater. 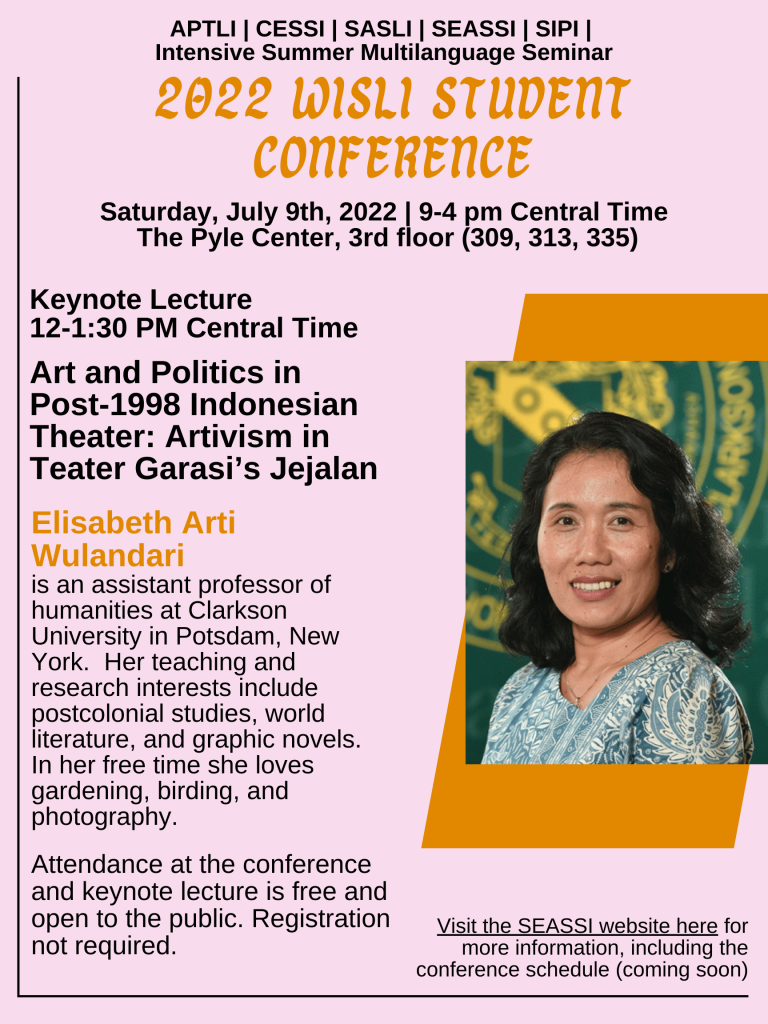