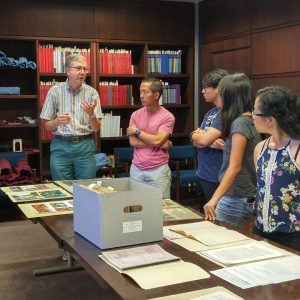 Students at SEASSI will be able to take advantage of a number of resources at UW-Madison. Wisconsin possesses one of the major Southeast Asia collections in the United States. Most of the holdings are housed at Memorial Library, the University’s main research facility. The collection covers all the countries of the region, is especially strong for Indonesia, the Philippines, and Thailand, and includes both vernacular and Western language materials. The University possesses an extensive network of disciplinary libraries that make major contributions to the Southeast Asian collection, with all titles being accessible through an integrated computer catalog system. Students are encouraged to make use of the collection, and to visit the Southeast Asia collection’s website.

The Memorial Library houses an extensive collections of video materials on Southeast Asia, including feature films and television footage from Indonesia, Philippines, Thailand, and Vietnam. Wisconsin has maintained a commitment to acquire Southeast Asian materials not duplicated by other North American libraries and to complement on-campus research and instructional programs. Among these is the systematic collection of 19th and 20th-century regional newspapers (with extensive microfilm holdings) and materials that reflect modern culture in Southeast Asia, including political and labor tracts, popular literature, religious pamphlets, organizational newsletters, photographs, videotapes, and audio cassettes. Largely overlooked by university libraries, these ephemeral or non-traditional materials provide access to important areas of everyday life in contemporary Southeast Asia, with particular focus on Indonesia, Philippines, and Thailand.